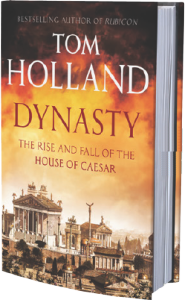 ad 40. It is early in the year. Gaius Julius Caesar Augustus Germanicus sits on a lofty platform beside the Ocean. As waves break on the shore and spray hangs in the air, he gazes out to sea. Many Roman ships over the years have been lost to its depths. Strange monsters are rumoured to lurk in its grey waters, while beyond the horizon there lies an island teeming with savage and mustachioed head-hunters: Britain. Perils such as these, lurking as they do on the very margins of civilisation, are fit to challenge even the boldest and most iron-willed hero.

Isis: The Origins of Violence

History at the Hay Festival- The Rise of Islam

Speaking freely about religion, in conversation with Francesca Stavrakopoulou at the 2014 World Humanist Congress

A response to Dr Jonathan Brown on the five daily prayers